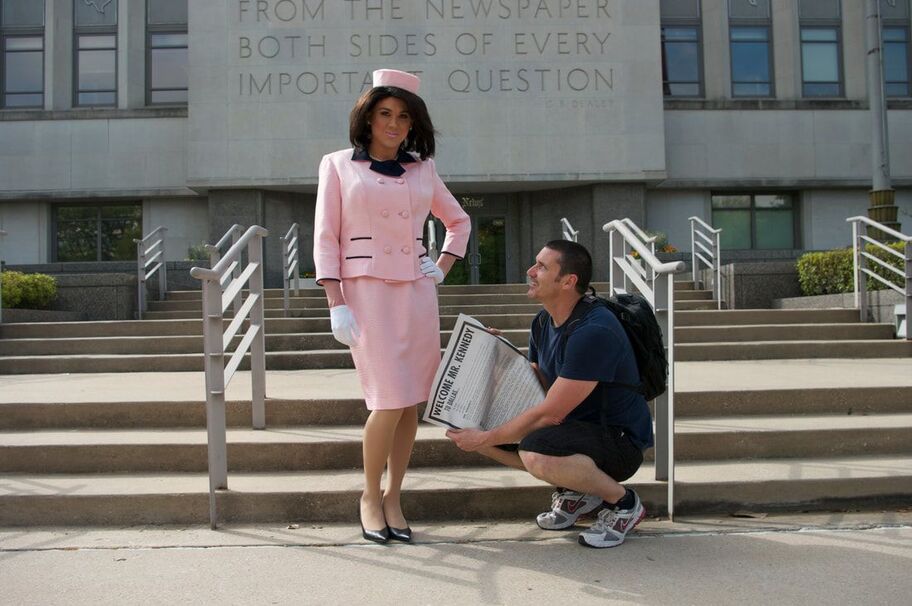 There, I was introduced to an Austinite — a darn-tootin' cowgirl, who wore embroidered boots and cat-eyed granny glasses.

Upon hearing that I'd just drove down from Big D, she narrowed her eyes and seethed, “Dallas? Eww...”

The Austin hipster's stink-face reaction was sidesplitting. Because Dallas stereotypes are — as they say — "two-hoots-and-a-holler" funny.

Our hairdos are supposedly teased so high-and-mighty, they can withstand 100-mile-per-hour gusts of wind.

"214 Trans4m” is a collaborative visual series that embraces Dallas architecture while illuminating remarkable women who’ve made their mark on North Texas.

I hope the approach draws a parallel between Dallas’ identity and gender identity.

The series is replete with historical research about Big D, which is an ever-evolving metroplex that frequently snubs architectural preservation while constantly building anew.

"214 Trans4m” reminds us that Dallas’ only consistent trait is transformation — not tradition.

It also informs George W. Bush’s neighbors that even before the City of Dallas was founded, half the population consisted of French-speaking settlers called Fourierists. They built a Texas society and called it “La Reunion.”

The Fourierists were following a dream. They envisioned Dallas as a promised land — one that abolished gender roles and defended homosexuality.
WHERE'S “214TRANS4M" BEING EXHIBITED?
Right now, inside the Arcade Gallery at CentralTrak, which is The University of Texas at Dallas’ artists-in-residence program located in Expo Park, an adorable historic neighborhood nestled between Deep Ellum and Fair Park.

Throughout June, “214 Trans4m” was such a crowdpleaser, the exhibit landed the two-month summertime cover of Arts+Culture Texas magazine.

​So CentralTrak extended its month-long run for a second month. The exhibit now closes July 31.
WHAT'S YOUR ART-AND-PHOTOGRAPHY BACKGROUND?
​In the ’90s, I lived in Austin after graduating from UT. There, I published SPREAD, a large-format Warholian magazine.

​’ZINE SCENE: While in Austin during the ’90s, Kusner published SPREAD, an alt-culture mag.
For SPREAD, I designed Austin-area photoshoots with locations, like, the Dorsett 221 truck stop, Robert Mueller Airport, the Ritz Theater and UT’s marble bathrooms in the basement of Battle Hall. 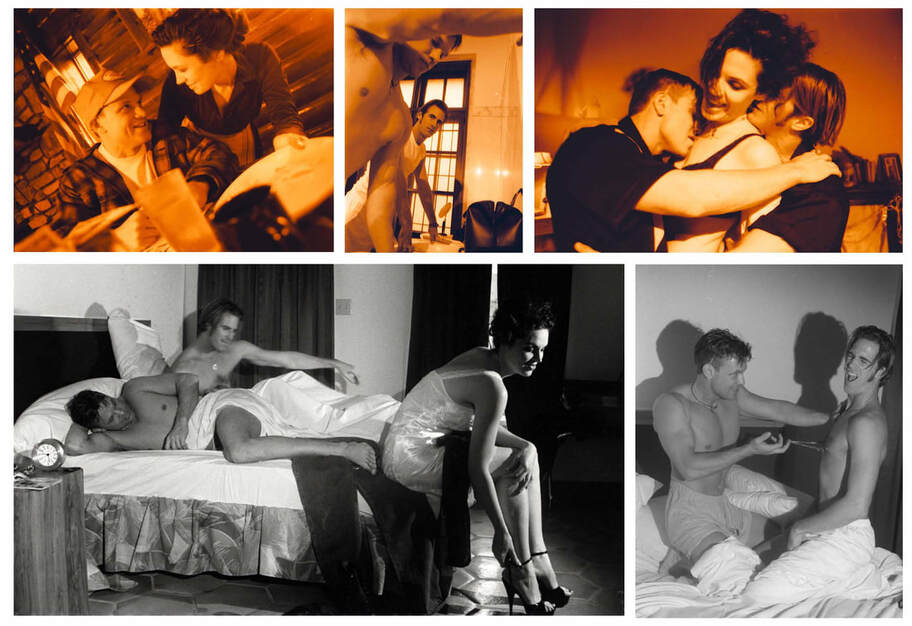 AUSTIN ’97: Kusner published Spread and art-directed "The Hitchhiker's Guide to Truckstop Culture."
WHERE DID YOU FIND THE INSPIRATION FOR “214 TRANS4M?”
My collaborator, Bryan Amann, and I were walking our dogs in Fair Park. ​There, I saw a 26-foot bronze sculpture of a Columbian Mammoth modeled after a prehistoric elephant discovered at a South Dallas excavation site.

The sculpture reminded me of Richard Avedon’s iconic “Dovima with the Elephants” series. 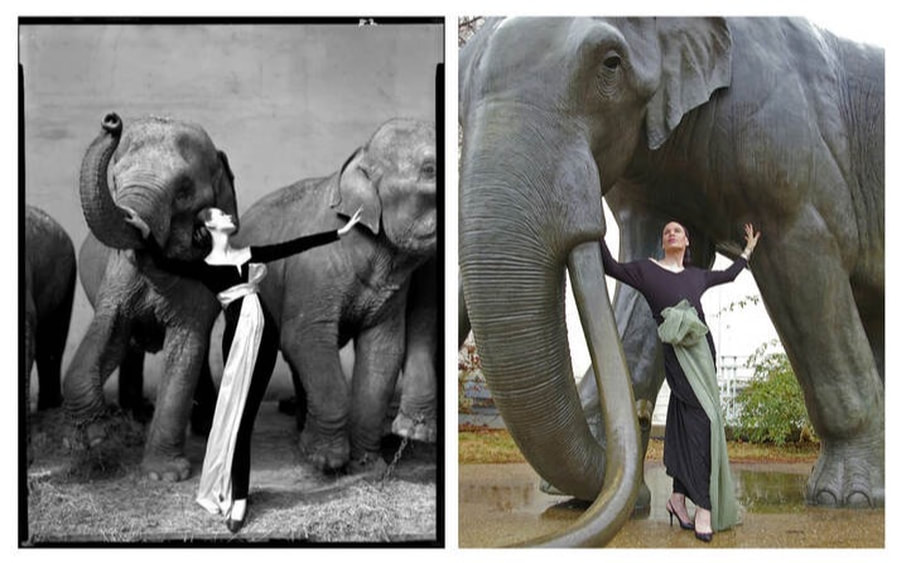 PREHISTORIC INSPIRATION: Avedon's "Dovima with the Elephants", left, and a Columbian Mammoth that used to roam the Trinity River 10,000 years ago.
“Sugar with Elephant” was so rewarding, it altered the way I looked at North Texas’ geographic points.

I fixate on local architecture, and the images from “214 Trans4m” emerge from my subconscious.

The shoots are like I’m placing statues in front of each location.

Tracing the locations' history is my favorite part of these adventures.

For example, Badu’s Forest Theater was named after the KKK’s first Grand Wizard.

And Dealey Plaza honors the publisher of The Dallas Morning News whose nearby headquarters lured Jack Ruby into the paper's advertising department at the exact moment of Kennedy's assassination.

Over in Irving, the Trinity Broadcast Network tapes the lavish “Praise the Lord” talkshow inside a replica of The White House, which contains a museum about public policies that intersect with faith.
​WHAT ARE YOUR TIES TO THE DRAG COMMUNITY?
After moving to Dallas, I continued  publishing queer content. And I often worked with local drag artists — kings and queens.

​D.I.Y. DRAG: Kusner's earlier series combined Dallas trans models with seasonal hardware.
Without getting too annoyingly PC, I’d like to make a tiny distinction: Some of my models are drag entertainers — but not all.

Some are on a gender path that venture far beyond drag’s limits.

I’m a proud member of both the drag and trans communities.

However, I once submitted myself to a preliminary makeover inside the Rose Room dressing suite. I was told, “The trick to compensating for a not-so-pretty face is distraction. So just keep piling on wigs.”

After four wigs, my drag consultant quit.
​
WHO DO YOU HOPE TO REACH WITH YOUR WORK?
Anyone who celebrated the recent DOMA and Prop 8 victories can process and appreciate “214 Trans4m.”

Honestly, I want someone like Justice Antonin Scalia to experience my “Callas in Dallas” project.

The work depicts opera diva Maria Callas on the day she was fired — via telegram — from New York’s Metropolitan Opera.

That same night, however, Callas gave the performance of her life, which was her American debut of “Medea” inside Fair Park’s Music Hall. 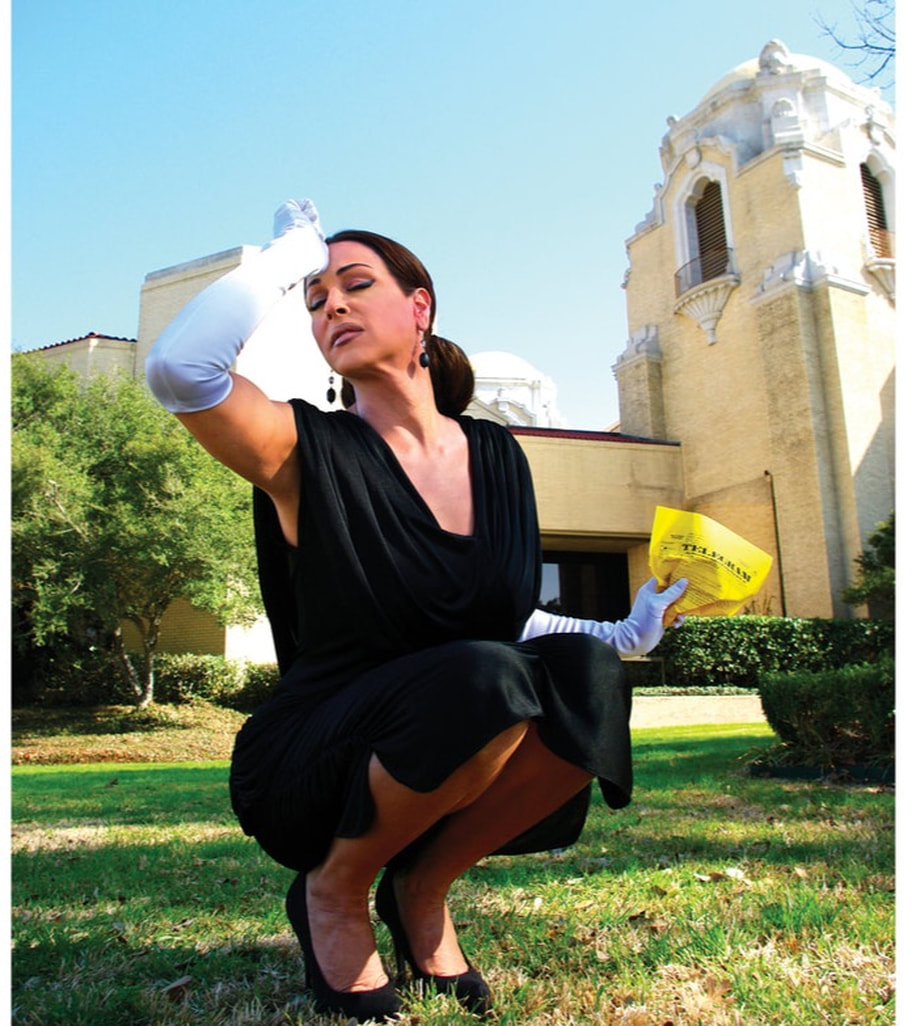 Justice Scalia is a well-known opera buff who can appreciate the fierce intensity of the artform’s finest interpreter.

How cool would it be if Scalia witnessed Erica’s powerful emotional range and experienced a transformative moment of his own?

I can almost imagine Scalia gazing at Erica — as if Maria Callas was a saint illustrated in stained glass at Washington D.C.’s Basilica of the National Shrine of the Immaculate Conception.
​
WHAT WAS YOUR FAVORITE PLACE TO SHOOT AND WHY?
That last apartment that Lee Harvey and Marina Osawld resided together before they separated: 214 W. Neely.

The two-story duplex is near Oak Cliff’s most fashionable corner. But the tiny building is in shambles. 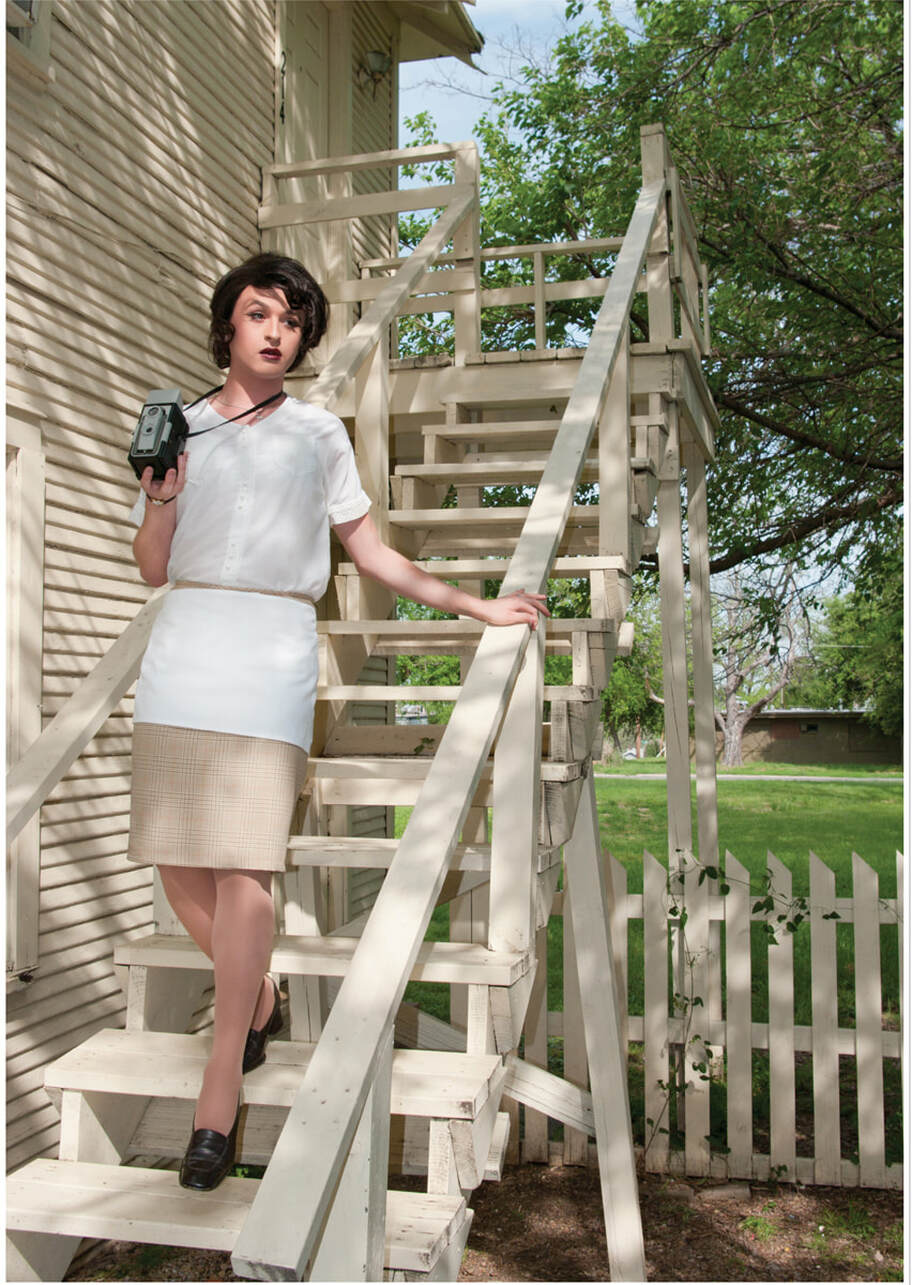 Marina's photos became both a Life magazine cover and a conspiracy theorists’ obsession.

For years, my collaborator Bryan Amann flirted with the present Neely residents to gain access.

A family lives there: Two sisters and their wheelchair-bound father live downstairs.

OAK CLIFF: On location, where an abused "Marina" shot her husband — with a camera....
Their brother lives upstairs — the unit The Oswalds occupied. But upstairs was strictly off-limits.

For the shoot, we cut the lawn, washed the staircase and removed any anachronistic items.

The setting was intimate. We felt like we’re the only people who appreciate the duplex, which is sadly neglected but a significant element of Dallas history.

The shoot was a blast. Our “Marina” (Frankyee Popovich) cracked hilarious jokes in a sexy Russian accent.

The current residents smiled as they spied our shoot from bedroom windows.

Last year, Bryan invited Marina to a gallery show where we unveiled the Neely images.

Marina predictably declined to attend.  But Bryan told Marina that we obtained an Imperial Reflex, the same camera Marina used to photograph Lee.

I love that Marina knows we immortalized her.

Upon hearing we cast a trans model to portray her, Marina told Bryan she’s always been supportive of gays.
​
ARE YOU WORKING ON ANY NEW PROJECTS?
I'd like to depict a young Laura Bush, circa 1963, as a Southern Methodist University freshman. ​

I now spend a lot of time in Austin.

While there, I'm writing a book: “​512 CYCOLOGY," which pairs gender with bicycling. 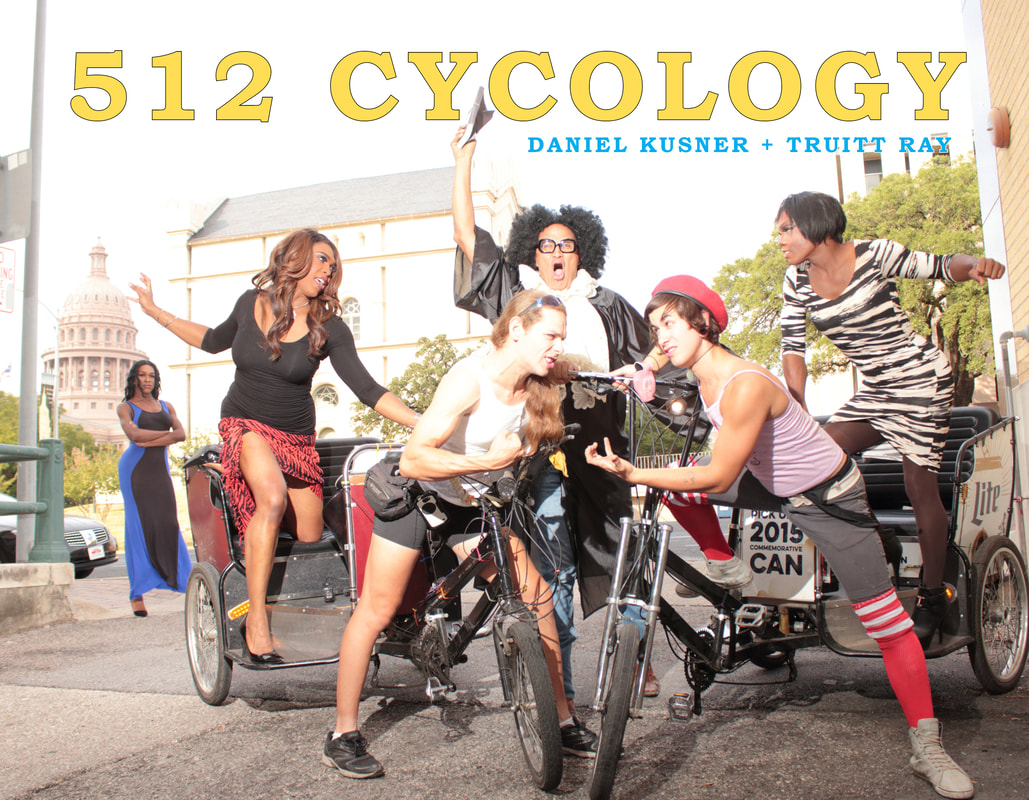